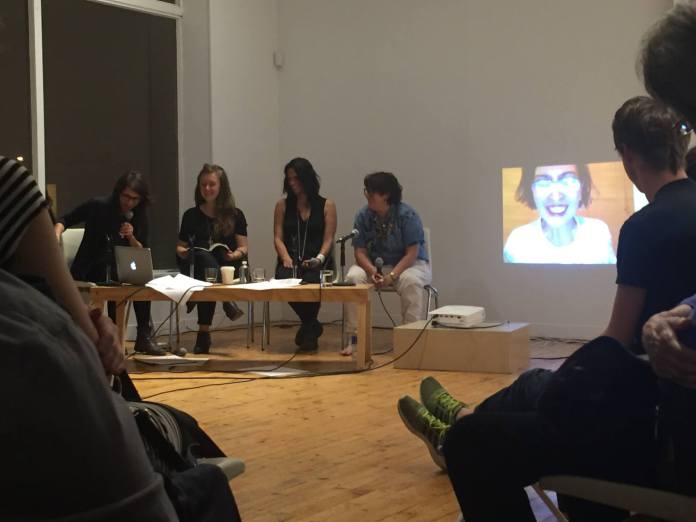 Earlier this month I made my way to Peterborough’s Artspace on the invitation of Tanya Lukin Linklater to participate in her exhibition Constellation/conversation alongside Leanne Betasamosake Simpson, Cris Derksen and Layli Long Soldier. Tanya had invited us to respond to “how to steal a canoe,” a poem written by Leanne. That night,  it was performed over and over again through Leanne’s voice and Cris’s cello, an incantation that lasted at least 30 minutes. Layli wasn’t able to join us, but from New Mexico she extended the form of poetry back to itself, reminding us that suffering is sacred because in living with our wounds, we are changed by them, becoming. Tanya invoked the many different valences that resistance can take, drawing out the connections between refusal and life, emphasizing that the labour required (for resisting, for living) is always bound up in alliance. When it came around to me, I started with a caveat: I am not an artist. My contribution to the evening would be of a different sort than what came before. My response was to reflect on how the different material forms I had encountered the poem in—through written language, through recorded sound, performed—exposed different aspects of its meaning.

When I was a very young child, learning to write was learning to conduct magic. Then, and still, the act of writing transforms what I think and feel, and I also believe that writing can impact upon the world outside me.

While preparing for the evening, I used this magic and I wrote Leanne’s poem out, over and over again, with different pens on different paper, trying to get the poem into my system.

In this way, I encountered the poem through the specificity of writing, which gave me clarity to the distributions of power in Leanne’s language.

The poem itself teaches me that canoes are alive. And that as with people, so with these water vessels: we have places where we imprison them.

Language, its specificities, tells me things. When akiwenzie says, “oh you’re so proud of your collection of ndns. good job, zhaganash, good job,” Leanne renders “indians” with the letters N, D and N, a kind of written slang that reduces the complexity of a life and a culture to a symbol. This foreshadows akiwenzie’s use of smudging to play on the security guard’s understanding of himself as enlightened, when really it’s his fetishization of Indigenous life that allows for akiwenzie and kwe to carry out their collective liberation.

Language also tells me about the politics of being. When kwe takes the canoe on her shoulder, Leanne reinforces the living nature of the canoe by addressing the canoe as “She” and “Her.” This you could hear in the poem as it was performed by Leanne and Cris that night, but what might not have been obvious to the audience, and what written language insists upon, is the object as being—“She” and “Her” are set title case in a text otherwise lowercased.

The use of “ndns,” and “She” and “Her,” is not necessarily something that voice conveys, but the voice and the cello tell us other things that language cannot account for, despite how hard the words can try. In writing, certain politics are revealed that cannot manifest through sound, but with sound, there is song. How to interpret the sound of Cris’s cello politically? And the cadence of Leanne’s voice as politics?

When I first encountered the poem, it was actually through the specificity of sound, through the track that makes up part of Leanne’s soon-to-be-released album f(l)ight. In the recording, Leanne’s cadence is slow, or slower than the pace the poem sounds in my head. Her pronunciation is bleeding, the words reaching to touch one another, carried by the elongated breath of Cris’s cello (Cris also performs on the album).

I wonder: what is the song that the canoe sings back? Is the conversation between kwe and the canoe like chorus and verse? Call and response? Like accompaniment?

Listening that night in Peterborough, something else happened, something in addition to what the earlier version of the recorded song showed me. “how to steal a canoe,” at the level of content, is about repatriation and it uses water as a tool. But the performance that night behaved as water—washing over, seeping, flowing, carving a course. In a way, word made flesh. Or, means made material.

Between forms, as between people in conversation generally, we attempt an honest engagement with this distance that cannot be undone.